One of the things I’ve noticed since moving back to Los Angeles this last year is the proliferation of trendy taco places and pricey indoor street food.

I suppose the taco  truck revolution has led the way in this phenomena and as a fledgling foodie, I am ecstatic about the abundance of choices and popularity of this modern twist on the lonchera trucks and otherwise lowbrow Mexican tradition. I also love the blend of Asian (Korean) and Mexican flavors, which seems to have become so commonplace, and arguably, quintessentially L.A.

With that said, this afternoon, I was on the prowl for some food after a long morning of walking around Downtown L.A. on an almost empty stomach. So, on my drive back to my apartment, I stopped around the Fairfax neighborhood to run a few errands and grab a bite. To my delight, I found the post office, as well as a great little original vintage shoe shop, Re-Mix Footwear, and another very cool vintage furniture store, Rehab, which will actually be moving to Pico Blvd soon…

And, of course, I found food! I ended up having a breakfast burrito and a latte at cute little coffee joint called Andante Coffee Roasters, which just opened up in September! THE BREAKFAST BURRITO was sooooo good. And the latte was definitely up to par. Here’s my review on Yelp!

And here are some fab reviews for Escuela Taqueria also nearby, which I passed up for the cheaper and larger burrito.

This brings me to my point. I love all good food, expensive, cheap, but for some reason, today I felt so turned off by the $10 tacos. It drives home something I’ve been mulling over in my mind since moving back to L.A., which is what I will refer to as the over commodification of traditional items that I have grown up with, like tacos, taco trucks, and street dogs.

On the one hand, I love the creativity and how a new generation of chefs and vendors in L.A. are embracing these foods that have been a longstanding part of city life. But, on the other hand, it’s as if making it fancy and putting a label or brand on it, makes it cool suddenly, at the cost of authenticity, and with a higher price tag. Santa Monica, for example, is perhaps the mecca of the gentrification of Mexican food. That is also just Santa Monica being, well, Santa Monica.

But it’s even more complicated than that. As I suspected, the mom and pop, authentic lunch trucks and taco eateries are struggling. This article makes reference to how the downturn in the economy and other city permitting issues have affected some lonchera trucks in the Boyle Heights neighborhood, but I know of other examples.

Again, for the most part, I’ve always just appreciated the diversity of options and creativity in culinary approaches, and cooler, new takes on the food I’ve grown up with. And I understand that staying competitive in the world means being creative and innovating, but it also makes me a little sad to think that the people who are truly struggling to make ends meet, and the poorer business folks, are the ones who get pushed out of the market.

Also, I just don’t feel fully comfortable paying $7 for a taco. There’s a lot more to this post than I care to address at the moment, but for now, I just ask readers to think about it. Obviously, a better product is worth more, but what does this say about the future and worth of the $1 to $2 taco?

Note: These tacos were made by some family friends whose traditional Mexican eatery in West Covina went out of business recently. My dad always uses them to cater our parties.

Oh, and just for good measure. Do you know anything about the history of tacos? Apparently they were born in Mexico around the 18th century and have something to do with the silver mines. Hmm, maybe the miners made tacos to take with them down there… or not. Fun to think about the history and evolution anyway. I’ve thought about this for sandwiches and onigiri, too, for example. 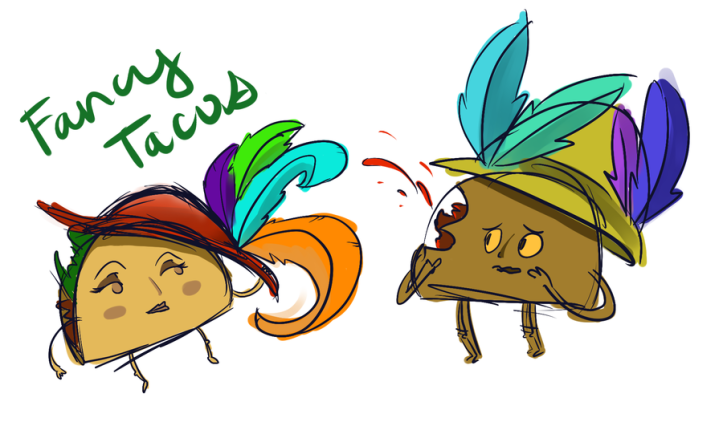